We Watched This in Kindergarten Today...

And I laughed for a solid 60 seconds. The kids looked at me like I was crazy.

Into The Woods ~ Medley ~

Into the Woods, It's Time to GO! 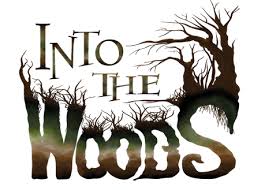 One of my favorite musicals is coming to film in 2014. The recent years of making classic musicals into film productions has yielded mixed results. Most recently, with Les Miserables, I have felt hope in the adaptations that could come in the future; I thought LM captured so much of the essence of the story, if not the musical. 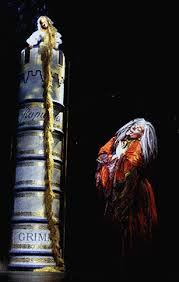 Now, high school is when I first became acquainted with the musical, ItW. I fell in love with the musical and the method of story mixing and matching of fairytales from ye olde brothers Grimm. I got to be Rapunzel in our HS play's adaptation. I was forced into a golden fro of a wig, but I survived it all, somehow. I feel especially qualified, thus, to judge the upcoming film that will appear Dec. 25th of 2014.

So far the cast looks promising; Jonny Depp as the wolf, Meryl Streep as the witch, etc. Good casting, a director that has experience with musicals (Rob Marshall, Chicago) and working with Depp (Stranger Tides, Pirates), and a fan base of many many thousands. We'll see what this production brings. 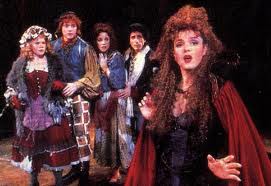 Here is the soundtrack of the 1987 production with Bernadette Peters as the witch:
http://www.youtube.com/watch?v=LiGRPYmTFV0&feature=share&list=PL2DA15F0D67DB64B7 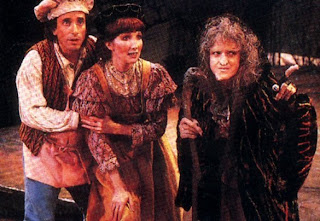 And here is the a three minute run of a later production, the 2002 revival with Vanessa L. Williams as the witch:
http://youtu.be/eSTM2NCmP-g 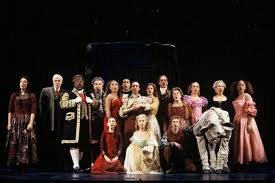 It's been a long hiatus from the blogosphere, and oh so much has happened since I last posted. Rather than try to catch up on the last four months, I am starting at the present and starting most especially with:

Dad, the incorrigible yard saler, found me a steal in the form of Pampered Chef pans. Included in the
set were the instructions for making a 3-tiered checkerboard cake. When you have finished the product, it looks like a normal cake. But inside? Raspberry and Vanilla cake, thrillingly alternating in columns and rows. Plus, there is Hershey's Chocolate Icing on top. You just can't argue with that goodness.

The top is one I made for Marie's family. The bottom picture, which shows the slice, was actually my first try at this cake. And yes, those "hugs" candies on top are raspberry flavored. To my knowledge, the only place to find them is at Hershey's Chocolate World. A recent jaunt to Jenny and Nathan's took me there and, little did I know at the time, gave me the perfect garnish for the next cake.

So make yourself some cake. Eat it. Celebrate the fact that you can have cake on non-birthdays.

PP and HJC: Keeping me going

So recently, I haven't been feeling so well. Actually, for the last week it's been like that. Thus enters the power if music. Every day I have listened to the radio, I have heard this song, by Phillip Phillips:


If you're tired of hearing it, so sad for you. The music and the lyrics have become very inspiring to me of late.


Then, two nights ago, my sister Heather called. What I didn't know, was after that most excellent phone call, she would be making this video for me:

Yes, she is super talented.
And I now have another new favorite song.

I am grateful for music and the positive influence it has on me, especially most recently. And I am grateful for  thoughtful, talented sister who takes that music straight to my heart.
Posted by Celeste Elaine at 6:44 AM 1 comment:

And sometimes they do not.

Point and case.... there I go again. I just learned that what you are supposed to say is Case and Point. I guess that nulls the impressive example I was just about to give.

So...impressive example: I would LOVE to own several varieties of this shelf paper. Until I can afford beauty at $25 a roll, however, this stays on the "in my perfect classroom...." list. Also on that list is a room with spacious dimensions, laptops for every student, shelves with organizer compartments, cute sewing projects I keep seeing on pinterest that I have no idea how to make time to make, every math game you can think of.... you know. That dreamy classroom. 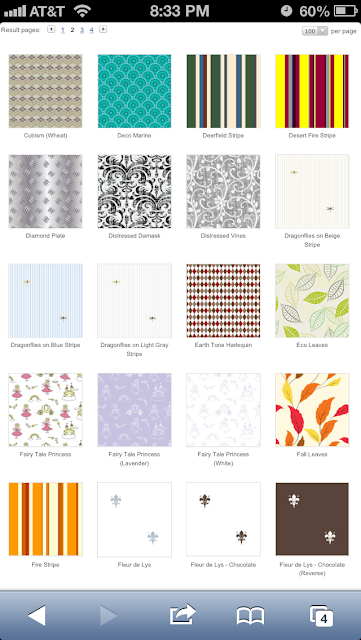 I would put the distressed vines on.... I love the look of those fall leaves. Wouldn't that be cool on....

Not to mention what's on page three of the Chic Shelf Paper List.
Sweet. And by that I mean sticky.
It is shelf paper, after all.

Yes, I went THERE

Something monumental happened this past week. I fulfilled a life dream. Checked off a most important entry on my bucket list, if you will. I went to dessert club.

My cousin Kari has this blog. For the past few years, I have looked and awed and sometimes even drooled every few days as I check the next entry she has up. Sometimes I feel like a Pavlov canine... but to see is to salivate. Kari is legend in my family, and she even has a fan base from my college friends. When my BF Carrie met Kari, she told me she felt like she was meeting a celebrity. Justly so.

Said cousin has a most inspiring tradition of having a monthly dessert club. This month, I got to be a guest, and it is a night neither I, nor my taste buds, nor even my stomach will forget. Oh, so many delights. Such good company.
I have a fantastic cousin... even though Melinda and I came way too early (I need to be more careful when I put things in my calendar), she let us stay and chat. Her girls showed us around the house and told some scar stories. I got to see a steam mop in action for the first time in my life. Then the desserts started to plate in. (Pour just doesn't work there).
As for the desserts, you will have to look at her blog to see when the post comes up. She's amazingly creative in her baking, so there are always a several recipes that make their way onto the site between the monthly dessert club post.

I had three favorites, but you only get two votes. The Lemon Pie was a hands down vote for me (inspired by the book A Walk in the Woods). The Blackberry Mudslide parfait (inspired by the book Where'd You Go, Bernadette?) with from scratch Irish Cream pudding was so deep in flavor and still light enough that it was all too easy to eat every last demi-spoon-ful. Had I another vote, or if I could have voted a tie, it would be between the parfait and the "Eat Me" cake, inspired by Alice in Wonderland. As it was, I chose "Eat Me;" it was breathtaking and smooth and flavorful. I have never had a cake with a texture like that. Mmmmmm. 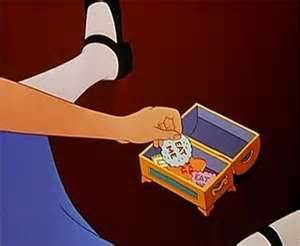 Melinda and I were invited to come, and she was kind enough to make it optional for us to bring a dessert. Goose had the great idea of actually testing our recipe before showing up with it. Good thing, too. We made a cake. I think we are going to post it on "Nailed It," the Pinterest-inspired failure blog. Everything sounded good; white cake, chocolate mousse, fresh strawberries and ganache, and cream cheese icing. In the back of my mind I was thinking that we might have needed that shortening-icing for making roses-- "A Rose for Emily," the eerie short story by Faulkner, was the inspiration. That and this:

The flavors together should have been better than they were. It should have been awesome, in fact...but it was just bland. The icing, soft because of its creamy cheese, melted off the cake so we added way too much merengue powder to stiffen it. Bleh. Between that and "no-taste red food coloring," We tried a piece, ate about a forkful, then decided we couldn't look at it any more. Before we left the kitchen that night, Melinda wrote a note to any roommates who might want it. 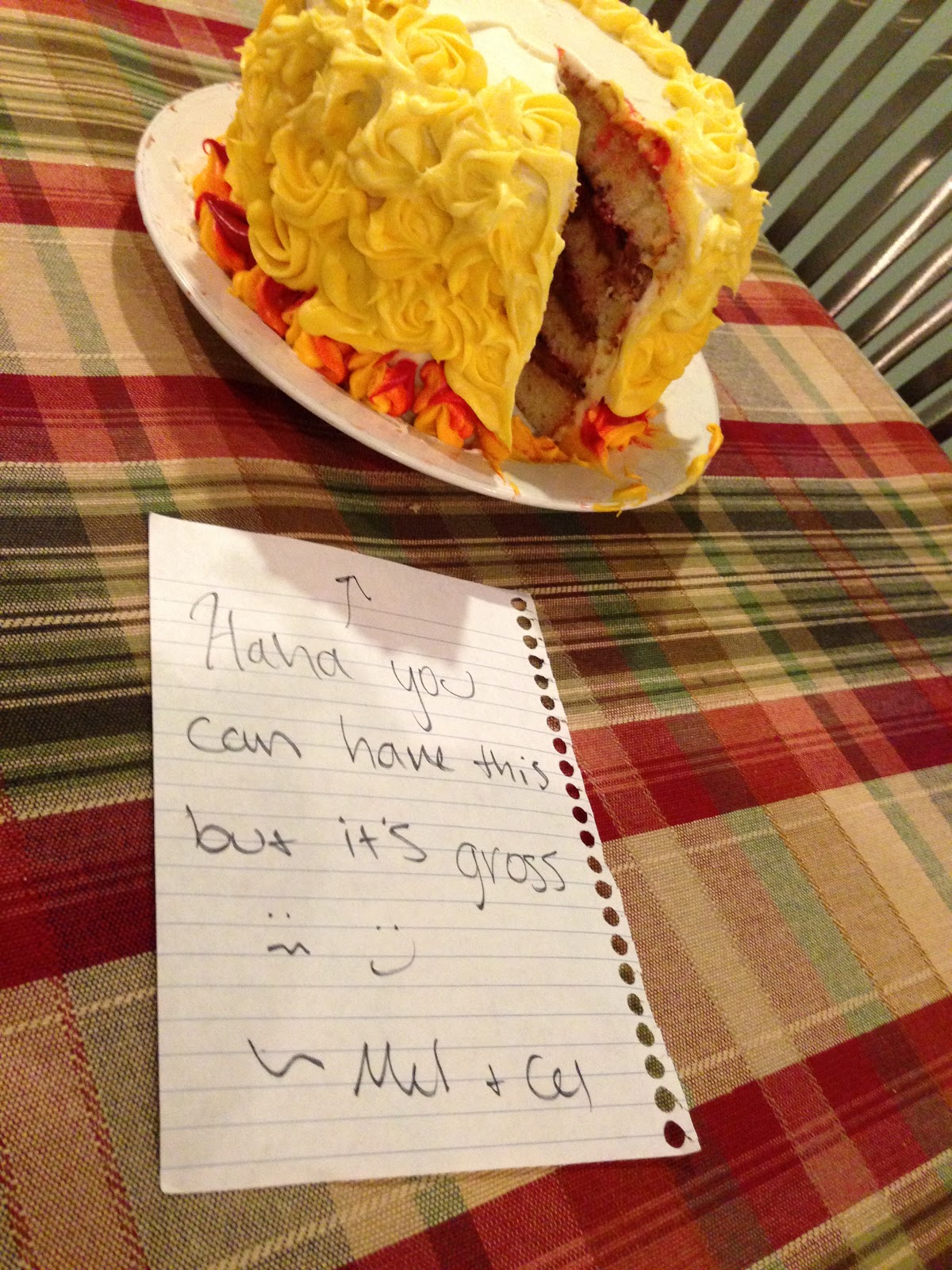 So, cake-less but story-filled, we went to dessert club. I happen to know that I will never be the same again.

Celeste Elaine
Born on the East Coast, I am passionate about things such as fall leaves, cool rains, and forest's foliage. My large family instills in me values and beliefs that prove to me that people are generally good, the world really is beautiful, and there is a purpose to all things, especially the hard ones. I am an Elementary School teacher, I went on a church mission and learned Spanish, and I love a good adventure--literary or literal.